Island Reversals in a major average like the S&P 500 are rare and are reliable indicator in signaling that a trend change has just occurred. As such an Island Reversal can identify a bottom after a lengthy or deep decline, or a top after a rising trend has run its course. Since Island  Reversals occur at the end of a trend, they represent emotional exhaustion, whether it is despair at a bottom or exuberance at a high. 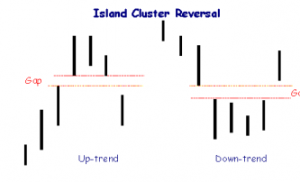 An Island Reversal bottom develops after an extended decline is accentuated by negative news that causes a gap lower. The low of the prior day is above the high of the day of the gap down. (Down-trend example) The Island Reversal  bottom is completed when some good news causes the market average to gap higher leaving a space between the highs of the Island and the lows on either side above the Island.

On June 5 the S&P 500 gapped higher after the Labor Department reported a surprising increase of 2.5 million new jobs compared to estimates of a loss of 8 million jobs. After trading higher for four days, the S&P 500 gapped lower on June 11 after the Federal Reserve indicated the Fed would keep the federal funds rate low through 2022. This lack of confidence in the speed and strength of the rebound forced investors to confront what should have been obvious – there will not be a V-shaped recovery. Instead it will be labored and require constant monetary accommodation and additional fiscal stimulus. Emotional buying on June 5 and emotional selling on June 11 created a gap of more than 1.0% in the S&P 500 which is quite large.

If the Island Reversal top signals a top, how much further can the S&P 500 fall? If sentiment had become too bullish and optimistic, the decline has to be deep enough to dampen bullish sentiment. Ideally, the S&P 500 will decline enough to bring the Call / Put ratio down to near 1.0. The S&P 500 fell to an intraday low 2767 on May 14, so a test of that support is likely. A drop to 2750 – 2800 may be sufficient to
dampen bullish sentiment and provide a buying opportunity. A close below 2767 would open the door for a decline to 2650.