There is an old expression that you can lead a horse to water but you can’t make the horse drink. It’s an

apt analogy to what’s occurring in the U.S. economy. The economy is opening after the shelter in place rules in all 50 states were lifted in the last half of May. But getting the majority of Americans comfortable in going into public places is going to be a challenge since COVID-19 preys on those over 55. Based on data from the Centers of Disease Control (CDC) more than 92% of COVID-19 fatalities have been people who are 55 years and older, so older Americans definitely have something to worry about when they consider going into public areas. However, less than 8% of COVID-19 deaths have been people who were 54 years old and younger. The real risk for older Americans is being near younger people who are out and about that could infect those over 74.

One reason the recovery is likely to be slower than expected is that those over 55 contribute 40% to GDP, up from 30% 15 years ago. As a group they will not throw caution to the wind. This means fewer people in this vital demographic are going to spend at the same pace before COVID-19 made them shelter in place, until they feel safe. GDP could be 4% lower if this group spends 90% of their Before Covid-19 (BC) spending.

A survey taken in the first week of June found that less than 40% of U.S. adults are still not comfortable in going out to eat, take a vacation, and less than 30% were ready to go to a shopping mall. In recent days there have been numerous stories about an increase in infections in a  number of states that have reopened their economy. In Florida, Arizona, and Texas the number of cases have hit their new highs. The media’s focus on these increases is surely going to weigh on American’s willingness to return to anything that resembles ‘normal’ behavior, and will slow the pace of the recovery. 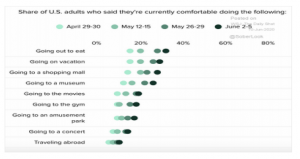 On June 10 the Fed indicated it would keep the federal funds rate low through 2022. This lack of confidence in the speed and strength of the rebound forced investors to confront what should have been obvious – there will not be a V-shaped recovery. Instead it will be labored and require constant monetary accommodation and additional fiscal stimulus. Until there is a vaccine this might prove optimistic especially in the next few months.